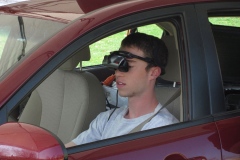 In collaboration with the Ohio Department of Alcohol & Drug Addiction Services (ODADAS) and The BACCHUS Network, Kenyon provided an opportunity for students to safely experiment with simulated texting while driving and drunk driving last Thursday, April 14 on Ransom Lawn. As part of the two organizations’ “Arrive Alive” tour, the College played host to a car that used special technology to immerse students in the dangerous world of impaired driving.

Anne Vleck, assistant director of student activities and program manager of Kenyon’s ODADAS grant, explained that the car worked in tandem with a virtual reality headset to create this experience. “You could actually step on the gas or brake and turn the wheels to steer the car,” she said. “You were given a virtual reality headset and it was kind of like a video game.”

“The car’s controls gave input to a computer,” said Gavin McGimpsey, who also took part in the simulator.

At first, students drove without any artificial impairment imposed on them. To simulate alcohol intoxication (at a Blood Alcohol Content of 0.1 percent), participants’ in-car actions — turning, braking, and using the gas pedal — were delayed within the virtual reality game. The texting-while-driving option was more straightforward; students simply sent a normal text message while driving with no virtual reality element.

The impaired driving simulator was available from 11:00 a.m. to 5:00 p.m. on Thursday, and Vleck said “the turnout was great. … We had a nearly constant flow of people.” Vleck reported that texting while driving seemed to be more challenging than driving with the artificial alcohol impairment. McGimpsey said that the two options both presented challenges. “When simulating drunkenness, I started swerving pretty quickly. With texting I felt better able to control the car but was making more infractions.”

“This is something that people do all the time without thinking of the dangers,” Vleck said. “I think the point of the [texting] activity may have been better received than the drunk driving simulator.” During the simulation, students were told that texting while driving accounts for more car accidents in recent months than does drunk driving, according to Vleck. 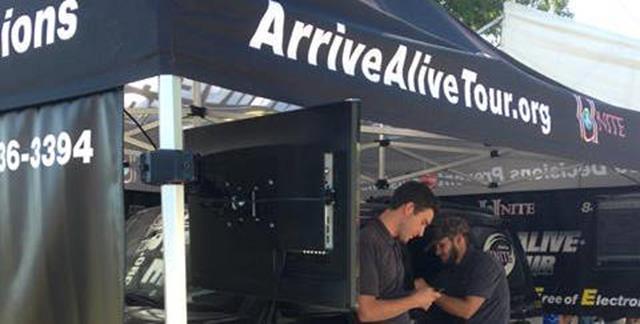 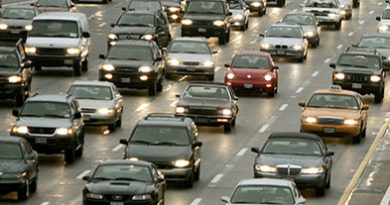